Rohan Morris (who co-owns Gleneden Family Farm with his wife Fiona) grew up on a cattle property in the North Burnett and always had an interest in Australia’s pioneering bush heritage, old farming traditions and rare trades and has been working with cattle, horses and many other animals all his life.

In 1994, Rohan acquired his first bullocks (at age 14) and began training them at his family farm near Gayndah with the help of a local ‘Bullocky’ from Mt Perry. From that time onward Rohan has always owned a bullock team and he remains one of Australia’s youngest Bullocky’s.

Over the years Rohan, Fiona, their kids and their bullock team have been invited to be in street parades, festivals, weddings and many other events giving bush blacksmithing, leatherwork and timberwork demonstrations.

They have been interviewed on TV shows including Channel 10’s Totally Wild, ABC’s Landline, Great South East, Creek to Coast, and Great Day Out (you can view the video here on YouTube or watch it below).

Fast forward to today and you can see a real-life bullock team and the iconic Australian Bullocky in action by booking a heritage tour here at Gleneden Family Farm. Rohan and his bullock team provide highly entertaining demonstrations with a generous dose of ‘bullocky humour’ and interesting educational information thrown in. Find out more about our bullock team heritage displays here.

Enormous and powerful, yet intelligent and co-operative, working bullocks are an awesome sight. You will be amazed by what can be achieved with a bullock team controlled by simple word of command. Even the seemingly impossible can be done. The Gleneden Heritage Display, featuring The Gleneden Bullock Team is an entertaining, education and authentic glimpse into Australia’s pioneering and transport history. It has something to offer any age group. Not only is it a display of the Gleneden Bullock Team in action, it also features the trade-skills needed to be a bullocky including blacksmithing, wheel-wrighting (wagons), bush timberwork and leatherwork (whips, belts).

Bullocks have been utilised for centuries and have continued to be used throughout the world for transport and agriculture. In Australia, when development outstripped the capacity of convict labour to create expensive roads it was working bullocks that provided the muscle needed in our infant colony to expand into the interior.

While Australia “rode on the sheep’s back” the wool that brought our prosperity, rode the dusty miles from outback stations to the sea-side ports on lumbering bullock wagons.  The bullockies and their teams cut and hauled the timber, transported mail, supplies & furniture and even houses for the new settlers.

Explorers such as Hume and Hovell (1824) and Charles Sturt (1828-9) used bullock teams during their explorations.

Seen as one of the more ‘interesting’ Australian bush characters, Bullockies and their teams have also inspired the pens of some of our greatest writers of poetry and prose including Henry Lawson (“The Teams”) and Henry Kendall (“Bill the Bullock Driver”).

Today in Australia, bullock teams and the bullocky are almost a thing of the past… almost.

Determined to help save an integral part of Australia’s bush heritage from being forever lost, Rohan the Bullocky has been learning and practicing (since his teenage years) a wide range of crafts and skills needed by the bullocky, including blacksmithing, bush timber crafts and green-hide leatherwork and whip making. The foremost of these being his working bullock team. Today Rohan is an active members of the Australian Bullock Drivers League which seeks to keep the skills and traditions alive for the next generation of drivers.

Here at Gleneden Family Farm, the dying art of bullock driving is comprehensively demonstrated and explained in Rohan’s relaxed and entertaining manner, from choosing and training your bullocks to driving a team of experienced workers. Learn the secret language of the bullocky and discover if his reputation for swearing is a justified one. Please note: Rohan does not swear very much AT ALL, is a qualified school teacher and does not swear in front of children.

In the days of the bullock team everything was simple but effective. Each type of load had it’s conveyance. A Table-top Wagon for the wool bales and other loads, a Timber Jinker for the logs and a Tip Dray for everything else that could be dumped on the ground. These carefully restored examples of the wheelwrights art have their own functional beauty while still performing the tasks they were built for more than one hundred years ago, alongside a well used collection of antique implements and tools. In our Heritage Displays you will see these vehicles in use. From loading a log onto the Timber Jinker to showing the labour saving functionality of the Tip Dray –  the bullocky, his bullocks and his vehicles combine to get the job done for you. Other displays including earthmoving with a Mouldboard Plough and a Tumbling Tommy Scoop are available on request. 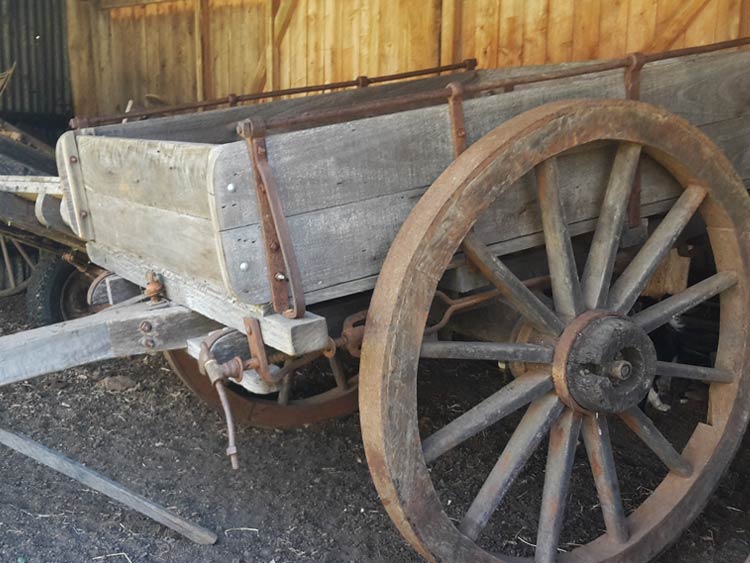 Today, as he was one hundred years ago, a bullocky needs to be a jack of all trades. Rohan the Bullocky has by love and necessity built his skills and knowledge in bush blacksmithing, and green-hide whip making so he can make and repair tools and items needed for the Bullock Team including starts, bows, chains, hooks & keys and of course his special long handled Bullock Whip. Bullock drivers also even needed to know how to weave their own hats!

If booking a longer display you will have the opportunity to include demonstrations of these fascinating crafts, discovering the specialised tools and techniques that contributed to the bullock teams’ effectiveness through Australia’s history. 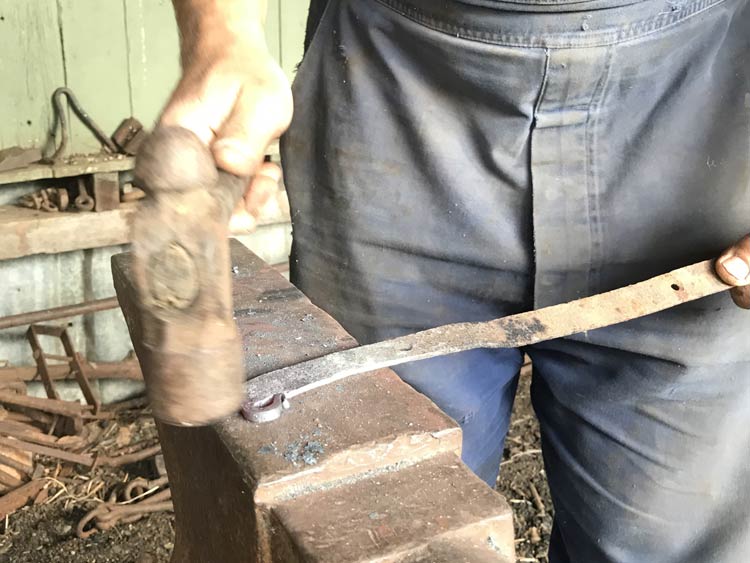 In the newly emerging colony of Australia, one of the Bullockies main lines of work was the felling and hauling of timber for housing, furniture and other buildings.  At Gleneden you can step back in time and join the Bullocky and his Team to work in the bush. Hear the crack of the whip and the rattle of the chains as you yoke up the team and head into the bush to haul timber back to the mill.

Then sit in the cool shade of a hand built bush timber shed to enjoy seeing Rohan the Bullocky continuing the Australian bush tradition of using hand tools and natural materials to create the things that he needs.

Whether he is shaping a bullock yoke with an adze and a piece of broken glass, splitting fence posts with a maul and wedges or showing how to climb a tree with an axe and board, you will gain a fascinating insight to traditional methods of bush timber work. 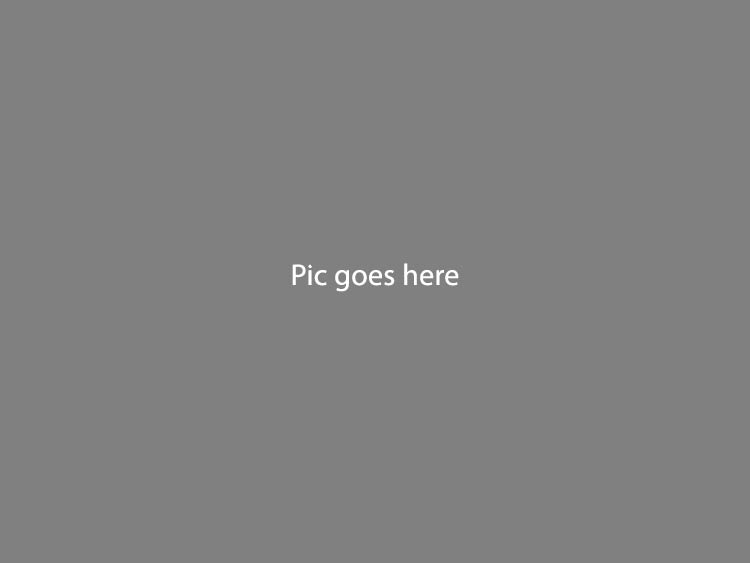 Why were there Bullock Teams in Australia?

If you’re not familiar with why Bullock Teams where needed in Australia, we have created a page in this website which provides some information about the subject. Click here to check it out. 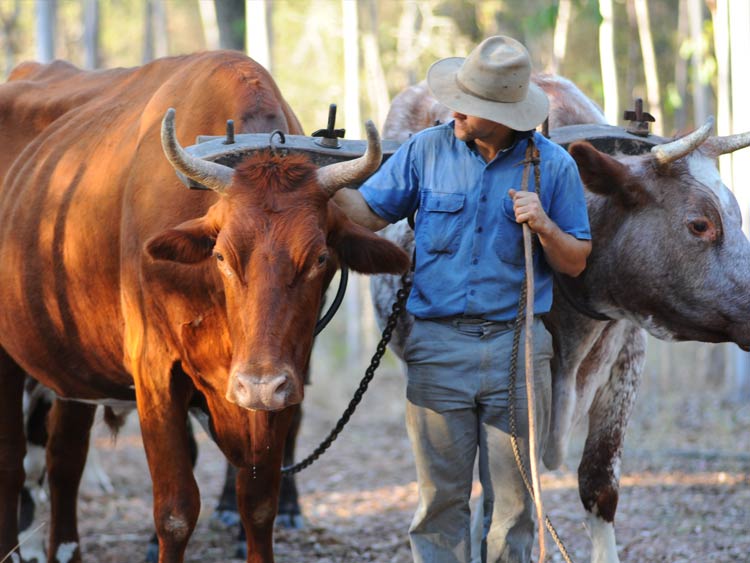 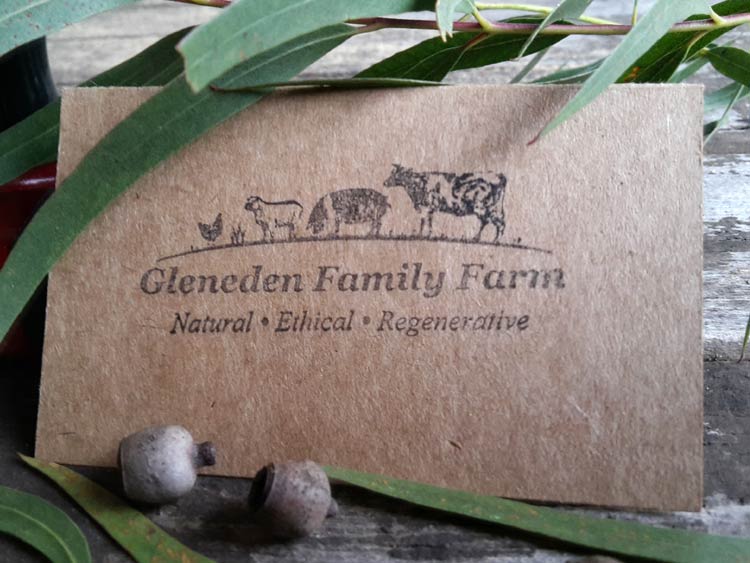 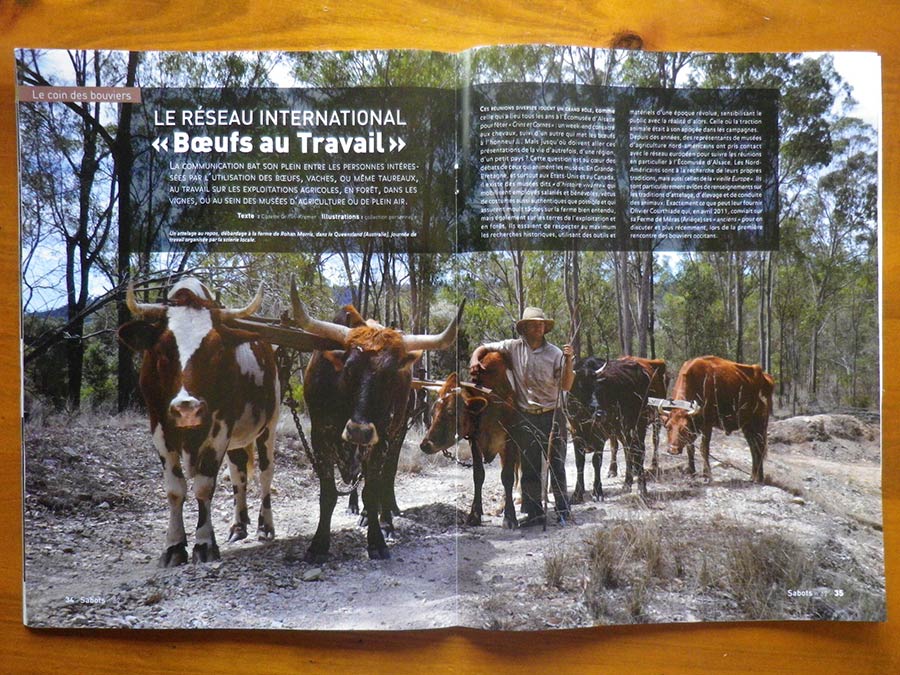 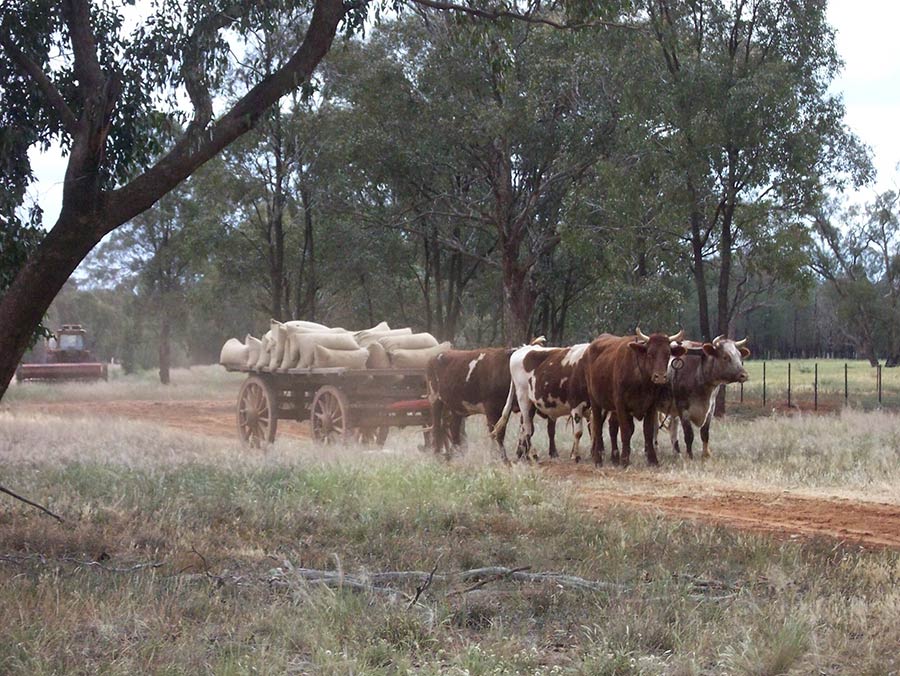 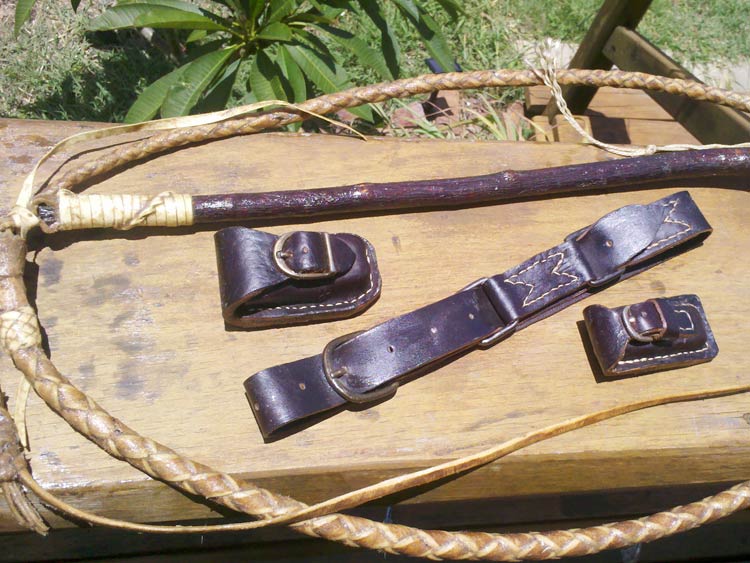 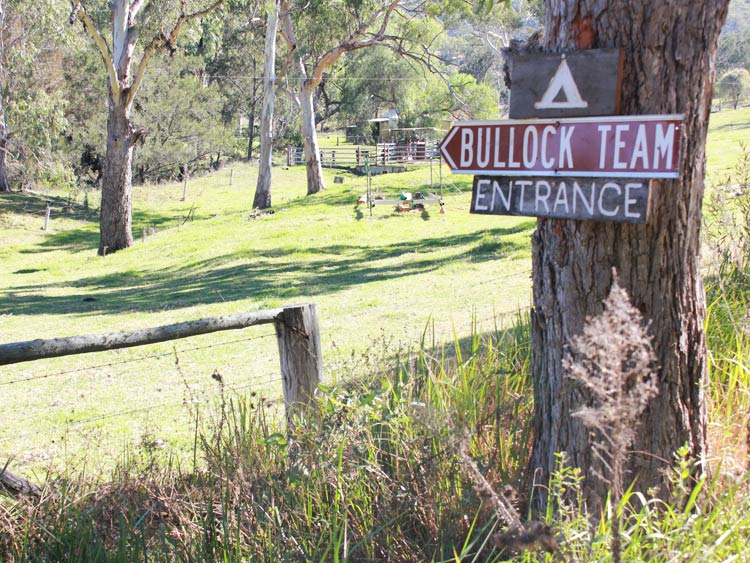 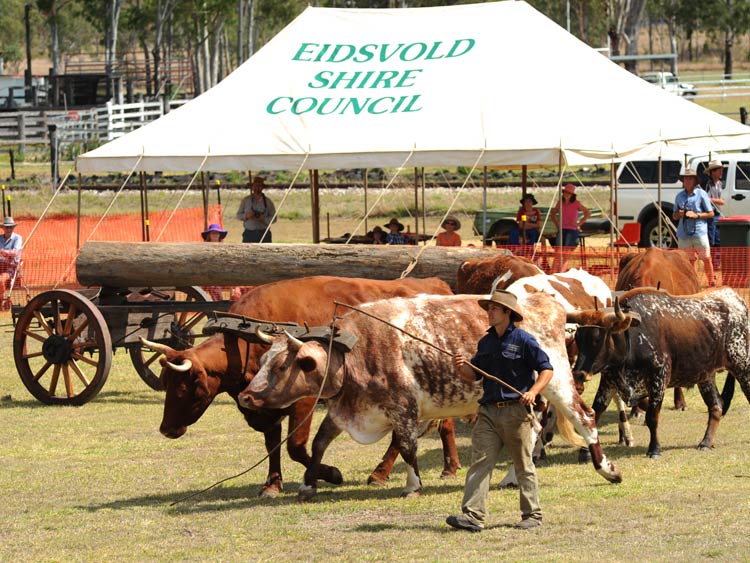 Does this add value here for questions specific to bullock teams. How to I add and change the questions?

Did Gleneden Bullock Team used to be located near Gayndah and Mundubbera?

It sure did! We used to be located at the Gleneden Valley, between Gayndah and Mundubbera, 160kms west of Bundaberg. We still have very strong ties to both communities. We relocated to our new property near Maryvale (which is close to Warwick) during December 2016.

Do you offer Internships?

Yes we do offer Internships. To find out more please visit this page of our website.

Where did Rohan learn to be a Bullocky?

Rohan grew up on the farm in Gleneden (near Gayndah). He first started learning to be a bullocky on that farm and on his mentors farm.

When Rohan finished High School and went to Uni in Brisbane, he would return home as often as he could to continue working with his Bullocks. Eventually he moved them to jondaryan woolshed (west of Brisbane) where he worked with them there.

They were then returned to Gleneden and of course moved with us when we relocated to Maryvale.

To find out more about us feel free to follow us on Facebook or read our blog. For all bookings and/or meat purchasing enquiries please phone us on (07) 4666 1273 or send us an enquiry via our contact us page. 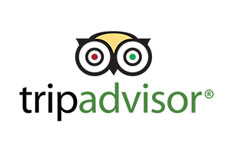 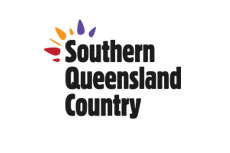 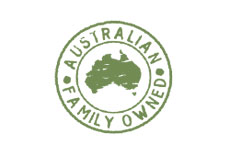 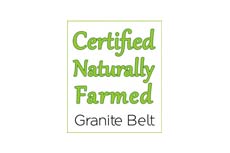